The Guyanese and Caribbean diaspora in North America and UK championed the restoration of democratic governance in Guyana during the period of the ethnic African PNC dictatorship. But they were powerless because of the threat posed by the rise of a communist government. Caribbean governments sided with the Burnham dictatorship as did western democracies to keep out the communist alternative in the form of the PPP. Reforms in Soviet Union and the collapse of communism paved the way for the restoration of democracy in Guyana.
Mikhail Gorbachev, the former leader of the defunct Soviet Union from 1985 till its collapse in 1991, ended the cold war allowing Guyanese the freedom and right to vote after 28 years of PNC governance. Not many Guyanese may be familiar of the impact Gorbachev’s policy in the Soviet Union and towards the West had on Guyana. Had Gorbachev not pursued and or implemented glasnost (democratic opening) and perestroika (restructuring of the economy) and armistice treaties with America, Guyana may well have remained a dictatorship (possibly) till now.
As a result of cold war politics injected by our political leaders from both sides during the 1950s, Guyana was transformed into a dictatorship after independence in 1966 from what was a liberal western type democracy. Jagan’s PPP was aligned with the Eastern bloc and the PNC the Western bloc. The PNC was installed in office by the Anglo American alliance of UK and USA. The West turned a blind eye on electoral frauds, the rise of the dictatorship, and abuses of human rights. The PNC was seen as a lesser of two threats facing America. Burnham received massive amounts of aid from the UK and USA. In Guyana, political parties, religious and civic groups and other organizations as well as individuals courageously fought the dictatorship for a restoration of democratic rule. But it was to no avail as the west continued to support the PNC. In America, several groups and individuals, including myself, appealed to every US President (Jimmy Carter , Ronald Reagan, George Bush Sr.) and Congress to apply pressure on the Burnham and Hoyte dictatorships to restore liberal democracy in Guyana. We held picket signs in front of the Guyana Consulate on third Ave and the UN and at other locations and events at various times between 1977 to 1992 condemning electoral frauds and human rights abuses. I remember a sign that appeared at several protests held by members of the PPP aligned ACG, “We protest CIA and America sponsored Election frauds in Guyana”. The group I belonged, that started at City College among students, took a pro-America and anti-communist stance. Vassan Ramracha and his brother Rennie Ramracha were the mentors of our movement. As political scientists, they understood geo politics and instructed us that America would not support a left wing movement. They advised that our group take a pro-America position if we were to win over Washington to bring political change in Guyana. 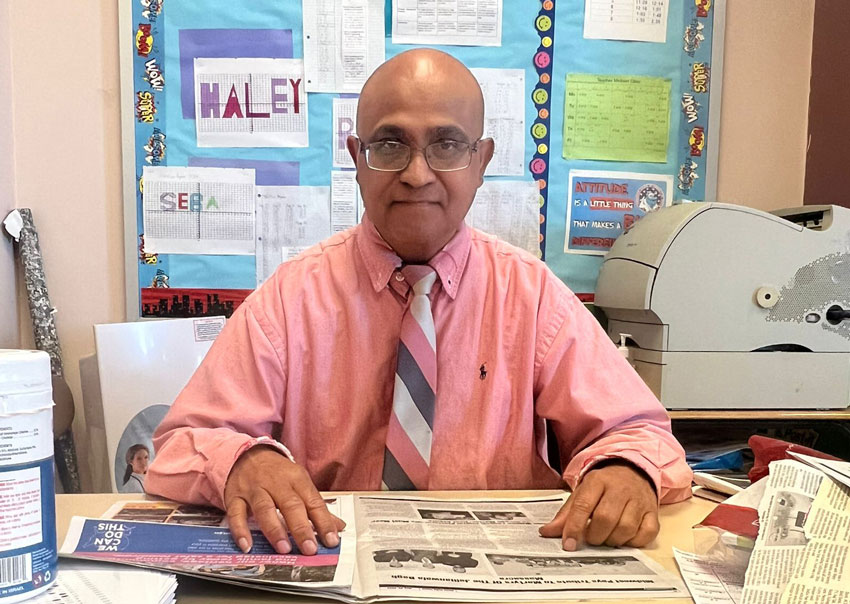 Dr. Baytoram Ramharack, Vassan Ramracha, Ravi Dev , myself, and others descended on Washington at various times and attending events in New York where Members of Congress spoke, pleading our case to Members of Congress and the Reagan and Bush administration to help us in our struggle to restore democratic governance in Guyana. The main obstacle preventing the restoration of democracy and free and fair elections in Guyana, we were repeatedly told by Washington politicians and American political analysts, was the fear of the rise of a communist government that could potentially pose a greater threat to USA interests than the PNC dictatorship although it was increasingly allied and aligned with the Soviet bloc. The US was not interested in replacing a geopolitical non-threatening corrupt PNC socialist dictatorship with a democratically elected communist government. Although friendly with those of us who were pro-America politically and strategically, Washington politicians were not motivated enough to support us on the issue of democracy in Guyana.
The US policy towards Guyana changed after Gorbachev came to power. Gorbachev began to democratize the Soviet Union. Gorbachev signaled an end to the cold war and assured the US that it was no longer interested in fomenting revolutions in the third world. Assistance to Cuba and Nicaragua was rapidly declining. A group of us re-lobbied Members of Congress and President Bush on Guyana during the changing global political situation. A few of us pleaded on influential members of the Indian community (GOPIO) to assist us with our lobbying efforts. The lobbying paid dividends. In trips to New York in 1988 (for the 150th Anniversary of Indian presence in Guyana ) and 1989 (First Global Convention of People of Indian Origin), a few of us took Cheddi Jagan to influential members (Yash Pal Soi, Thomas Abraham, etc.) of the Indian community and the Indian press as well as the New York Times and Nation magazine. Jagan laid down the case for restoration of democratic rule in Guyana. He stated that he was no longer a dogmatic communist. He said he was “more Gorbachev than Gorbachev”. He said America had no reason to fear his return to power. He pledged that Guyana will be a democracy under a government he leads. Several articles were published in the Indian weekly press, Nation, New York Times, and other publications. The Chair of the Democratic Party, Ron Brown, pledged support for democracy in Guyana. Several Members of Congress (including Ted Kennedy, Stephen Solarz, Elliott Engels, Ted Weiss) issued statements condemning Guyana’s dictatorship and human rights abuses; all of these members and more were members of the India Caucus that was very sympathetic to and supportive of Jagan.  President Bush Sr. called on Desmond Hoyte to return the country to economic and political liberalism. We learn that there was a gentleman’s agreement between Bush and Gorbachev on democracy for Guyana and Nicaragua: Gorbachev would ensure free and fair elections in Nicaragua and America would ensure free and fair elections in Guyana. Jimmy Carter and his Carter Center were invited in both places to oversee free and fair elections; the US provided funding for observers and for the balloting. There was a change in administration in both countries: Communist Sandinistas and the PNC were removed from office via the ballot box. The PPP was allowed to take power and would govern for 28 years.
Clearly, the collapse of communism and the Soviet Union paved the way for restoration of democratic governance in Guyana. This would not have been possible hadn’t Gorbachev been invested with power to democratize the Soviet Union. The pro-America advocacy and the dedication and commitment of a handful of us secured democracy in Guyana. Off course, many in Guyana and other groups in the diaspora helped to bring about the much needed change in 1992.
Democracy in Guyana Mikhail Gorbachev PNC dictatorship PPPC Dr Baytoram Ramharack Vassan Ramracha Ravi Dev Dr Vishnu Bisram GOPIO