Dr. Vishnu Bisram was on Friday evening conferred with the prestigious Bharatvaashi Gaurav Samman Award for the year 2023. The award is given annually by Antar Rashtriya Sahayog Parishad (Indian Council for International Co-operation) to a few Indians in the diaspora who distinguished themselves in selfless service to their nation or India. Dr. Bisram served his community in Guyana and USA for some 55 years including promoting culture and helping to lift people out of poverty. The honor includes a trophy with a citation and a hefty cheque of some Rs.100,000.  Dr. Bisram returned the funds to the organization to continue its public service work and research on the Indian diaspora.
The award ceremony was held at a valedictory session following a forum on the use of Indian languages outside India as a means to promote Indian culture abroad and project Indian’s soft power. It was held in the auditorium of ICCR at Azad Bhavan in the heart of New Delhi, the capital of India. Mr. Mookeshwar Choonee, President of GOPIO International of Mauritius, was also honored with the same award for his enormous service to the diaspora in Mauritius. Both gentlemen are well known and held in high esteem by political decision makers in India, both at the center and in UP and Bihar.  They are organizers of Indian diaspora conferences. 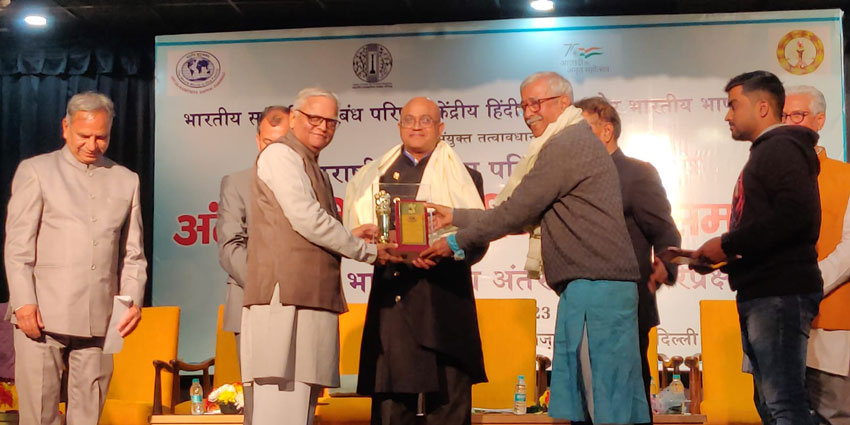 The Bharatvaashi Gaurav Samman is the highest Indian award given by a NGO to PIOs or NRIs (OCI) or an organisation or institution, established and run by ARSP which was founded in 1967. It is given out for outstanding achievements and or service to India and or other countries and or the Indian diaspora.
Dr Bisram was honoured for his selfless and altruistic service to the Indian diaspora in several countries not the least being in Guyana, Trinidad, and USA and for his charitable activities in India and other countries.  He is a true diaspora activist in the sense that he serves the diaspora in multiple countries. He was recognized for his commitment to community welfare and for courageously championing democracy and for promoting culture in his native Guyana and other countries of the large diaspora. 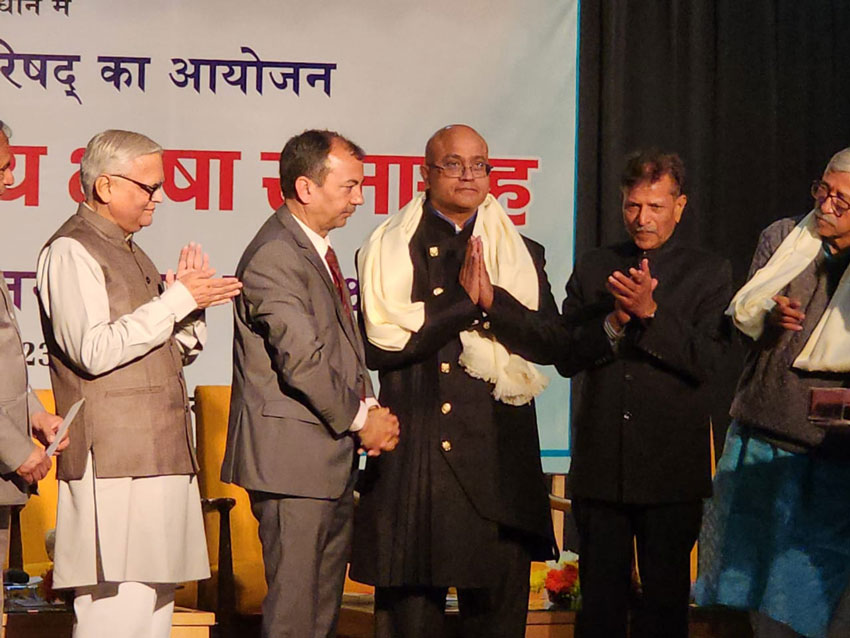 Dr. Bisram’s educational background and scholarship was cited as another reason for his recognition and honor. Dr. Bisram is a scholar par excellence known for his multiple doctorates and other degrees in Bio-Chemistry, History, Political Science, Sociology, Economics, and educational Administration.  He is widely recognized as an international relations expert earning a doctorate in the field. In addition, he has written extensively on the diaspora. And he has taught various subjects for over forty years. He is also a reputed ad well known psephologist or pollster conducting polls for over three decades in several countries around the Caribbean region and in India, Fiji, and Mauritius. He is also a well-known and respected newspaper reporter and columnist in Guyana, Trinidad, and the Caribbean diaspora in North America. He has given over forty-five years of service as a media operative and is a household name in several countries.
Dr Bisram and Mr. Choonee were invited as special guests for the Friday afternoon’s program. India’s Minister of State for External Affairs, Shri Murlidaran, commended the two awardees for their service to the diapora, expressing the hope that the honors will serve as an encouragement to others to pursue voluntary service to their communities.
By Pawan K Upadhyay
Dr Vishnu Bisram Prestigious Samman Award Pawan K Upadhyay Indian Council for International Co-operation Antar Rashtriya Sahayog Parishad indo caribbean Guyana