I read that High Commissioner to India, His Excellency Charandass Persaud, will be returning home soon. A suitable replacement is needed.  I can’t think of anyone who is better qualified for this position than the diplomacy specialist, prolific writer and diaspora activist, Dr. Vishnu Bisram. He has all the qualities to be an excellent ambassador.

Although not a career foreign service diplomat of the government of Guyana, Dr. Bisram has been serving as a non-official ‘diplomat and ambassador’ for decades by promoting Guyana’s interests in the United States, India and other countries. Wherever he travelled and lectured, he promoted Guyana .

Dr Bisram is well known for his consistent advocacy for free and fair elections in Guyana over the last 50 years, and was never fearful to condemn fraud and violations of human rights or organize protests, rallies, marches and petition drives in the USA and Guyana. He belongs to that very small group of Guyanese activists dedicated to the country’s democratic causes. He worked closely with US politicians to help liberate Guyana from dictatorship. His lobby and advocacy helped to restore democracy and free and fair elections in Guyana in 1992.

He also helped to organize and coordinate as well as write about Guyanese diasporic activities in the USA since 1977. He organized and championed the diaspora in the USA for over 45 years. He has been very active in a number of Guyanese, Caribbean and Asian Indian organizations. He has been repeatedly honoured for his activism and journalism by community-based organizations.

Dr. Bisram is a well-rounded distinguished scholar, creative thinker, media writer, community leader and organizer. He studied Foreign Policy (Relations), International Politics, International Relations, Diplomacy and History. He is a specialist on Indian and Asian Affairs, and holds more than one Ph.D. in the Social Sciences.

Dr. Bisram helped organize seminars and presented papers at scores of academic conferences in India, and was a guest lecturer at many universities in India. He has visited India countless times. I don’t think any Guyanese has visited Guyana as often as he did. He managed to establish and maintain close, high-level contacts in India. 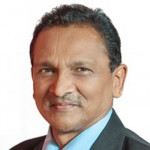