It is important that historical reports or claims or narratives be accurate. Thus, I write to correct Hamilton Green, former PM of Guyana, and an anti-Indian politician, on his claim of a rape, murder, and arson suffered by an African family at Tain, Port Mourant, Guyana during the early 1960s (penned in KN Jun 4) that he invoked as reprisal for the massacre of Indians in Wismar. Such a violent reprisal is unjustified then and now some 58 years later. There is no justification for anyone to pursue revengeful acts regardless of ethnicity or other factor.

Tain is a sub-village of larger Port Mourant sugar estate that is comprised of several sub-villages like Ankerville (where Jagan was from), Train Line, Miss Phoebe, Babu Jahan or Babu John where the monuments for the Jagan’s are located, Portuguese Quarter, Bound Yard or Coolie Yard, etc. Tain was in its history and remains a very peaceful community with no racial tensions as alluded to by Green. In fact Port Mourant, the largest village in Guyana, with some 20K dwellers at the time, had very few African families (seven, I was told) and no racial conflict; it escaped the 1960s race riots. As the home town of Jagan, supporters ensured there was no violence in the village that would be an embarrassment to the leader. Tain had only two African families and neither family was racially attacked although they voluntarily left Tain and relocated to African villages in Upper Corentyne (Liverpool and Lancaster). So Port Mourant was and remains an Indian village.

I am from Ankerville and know Port Mourant (where I received my formative education) quite well. I researched Green’s claim of the violence against the 'Ishmael family' interviewing many elders from the area. No African family with the name ‘Ishmael’ lived in Tain or anywhere in Port Mourant. Green got the family name and location wrong. It was Felix Ross of Train Line, not Tain, that was murdered; Ross family was the only African home in Train Line  -- the last house before going into the backdam where rice and cane were cultivated along with miles of thick vegetation. The home was indeed attacked in the night by known criminal Indian elements. Ross was murdered. But his house was not burnt (no arson involved). There was no police complaint of a rape but the killing was brutal. The house remained in tact; there was no fire'; Green made up the claim. .

Contrary to what Green penned, the killing was not race related, and as such could not be the basis for a reprisal against Indians elsewhere (far away East Coast or Georgetown or Wismar). Felix was a RC (Royal Constabulary) and worked at the estate both as a community police officer and a guard or watchman at the estate. The Ross family was very warm and friendly and well treated. The members attended Indian religious events and weddings. They partook in community activities. They visited Indian homes and were very helpful in community events. They had no issues with the larger Indian community that no issues with them. 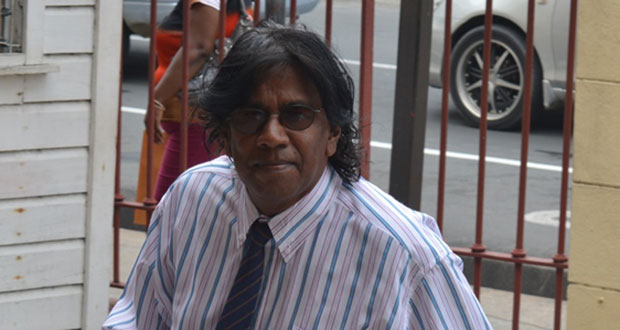 Ross filed criminal reports on illegal operations of bush rum maker (moonshine) Seeyah and company of Train Line. Race played no part in Ross behavior to attack Ross.  Seeyah (well known as Creature) was before the court for illicit rum distilling operations because of Felix complaint. Creature ill-treated all regardless of race or relationship.  He was a terror known for cattle rustling or stealing cows (including my family's) and horses and bullying people. Race had no influence on his behavior. Creature threatened and swore to get at Ross for the criminal complaint of bush rum making. Creature (note his call name – feared by even the most powerful Indians in the area) and company raided the man’s home in the dead of night. The man was killed at the hands of Creature. He and three others were arrested. Many Indians went to the funeral that was held at an African cemetery in neighboring Rose Hall (yes, race separates us even in worshipping and death -- the reality of Guyana then and now).

Felix and wife had two daughters – Iris and Princess – a son whose name is not recalled). They did not bother anyone. The family moved to Rose Hall after the murder.

There was a swift trial of the alleged murderer. Creature was convicted and imprisoned. The three others pleaded not guilty, were represented by an African lawyer, and were freed of the murder charge. I am told that another prominent African attorney came from Georgetown and was involved in the case. I was told that rape and arson were not among the charges. So, Green got it all wrong on motif and the incident itself.

Creature spent several years in jail. When he was released, he continued to terrorize people. He met his death the same way he killed Felix Ross – an axe on his head – a gruesome death at the hands of his neighbors who he terrorized. One afternoon, his neighbors waited as he returned home drunk. He was pounced upon and killed. The community raised money to defend the killers. I was told is that a very bright lawyer from town was involved in the case – as prosecutor and or as defense. All but one of the killers was freed. The community breathed a sigh of relief.

The two African families living in Tain -- Barkley and Bowell – moved out. Barkley lived in Tain at the last Street just before Clifton. He was married to ‘a dougla’ woman from Ankerville. His pigs were attacked during the nights by bandits. It was related that bandits (led by a notorious Store Maid) from Ankerville raided the sty or pig pen – a criminal attack. Not race related. It was related that there was a small fire in the yard one evening. Bowell, a Mixed (re-skinned) of African and White ancestry, also lived in Tain. He was married to a dark-skinned Indian female (Patricia) who was ‘a madrassis’. Bowel and his wife practice Madrassis faith of Hinduism and were well known for their ‘crystal ball operations’ – determining solutions to petty crimes. Because of racial tensions in the country, both families moved out to Upper Corentyne to African villages.

Regrettably, Basil Butcher’s family, a Mixed African family from Haswell sub-village of Port Mourant, behind Roop Mahal, next to the community center, also moved out. He, Joe Solomon, and Rohan Kanhai, played cricket at Port Mourant center ground as well as at the back of Jagan’s home (indentured Indians ground) where there was an ancient ground established right after indentureship in the 1930s by volunteers. Butcher’s family moved out from the area to McKenzie probably because of racial tensions but moreso for business opportunities. The remaining two families in Port Mourant also moved out – probably because they felt isolated and out of place.

There was some violence in Port Mourant (Tain) during the 1960s related to sugar strike. The strike started at Leonara on Feb 12, 1964. There was bombing of a truck (at Clifton, next to Tain) taking sugar workers (strike breakers) to the backdam in Clifton, next to Tain.  One Black (Monroe, aged 22) and one Indian (Gunraj, unknown age but in the 20s) were killed. Molotov cocktail was used to disrupt transportation and to drive fear in those who broke the strike. Monroe died right after the incident and Gunraj a day later. And there was another explosive bomb of another truck on the Tain estate road going into the backdam in which 15 scab workers (Indians and Africans) were injured with no deaths. Race played no part in these bombings.

The scabs were recruited by the estate to break the strike that was called by GAWU. Workers took their own actin in those violence, not union or politically related.  They planned and organized bombing of a truck that was ferrying strike breakers. These strike breakers were mostly recruits from African villages. Race relations were tense in the country. But the few Africans in Port Mourant were not targeted or attacked. Being the village of Jagan, the few Africans were protected unlike what took place against Indians in greater Wismar .

Green had stated that the massacre (and ethnic cleansing) of Indians in Wismar were reprisals for killings of Africans by Indians.  The record would show that more Indians than Africans were killed on the coast (5 Blacks versus 13 Indians). So the Wismar Massacre could not be a reprisal for the killings of Africans. The massacre was carried out as per the X 13 Plan that was conceived by Burnham and the PNC. Green was reportedly also part of it. At the time of the massacre of Indians in Wismar, Robert Jordan was MP for Mckenzie/Wismar, Christianburg. Jordan was from Agricola.

The greatest service Green can do for Guyana at his age is to tell the truth -- his connection the X-13 Plan to wipe out Indians. The home of the family (in Wortmanville) of columnist Freddie Kissoon was on the X-13 Plan to be wiped out. Had it succeeded, Freddie's family would have been wiped out. The X-13 Plan was exposed and Police Commissioner Peter Owen, who was anti-PPP, and by extension anti-Indian, was forced to expose the plot when it was made public. Owen arrested one of the conspirators.

Contrary to what Hamilton Green penned, no African was attacked on account of race in Port Mourant.