Indo-Caribbean Peace March in Richmond Hill in Recognition of Gandhi

Indo-Caribbean Peace March in Richmond Hill in Recognition of Gandhi

A Peace march was held last Sunday October 23 in Richmond Hill to recognize the lifelong work of Mahatma Gandhi. The march was planned and organized by G uyanese and Trinis.
Gandhi was born on Oct 2, 1869. This year marks the 153rd Gandhi Jayanti, or birth anniversary of Mohandas Karamchand Gandhi , known worldwide as Mahatma. Gandhi led India’s independence movement from 1916 using non-violence or ahimsa. He is called the Father of the Indian Nation. He was also credited for ending the recruitment of indentured or girmitya laborers in March 1917 and the abolition of indentureship on January 1, 1920. 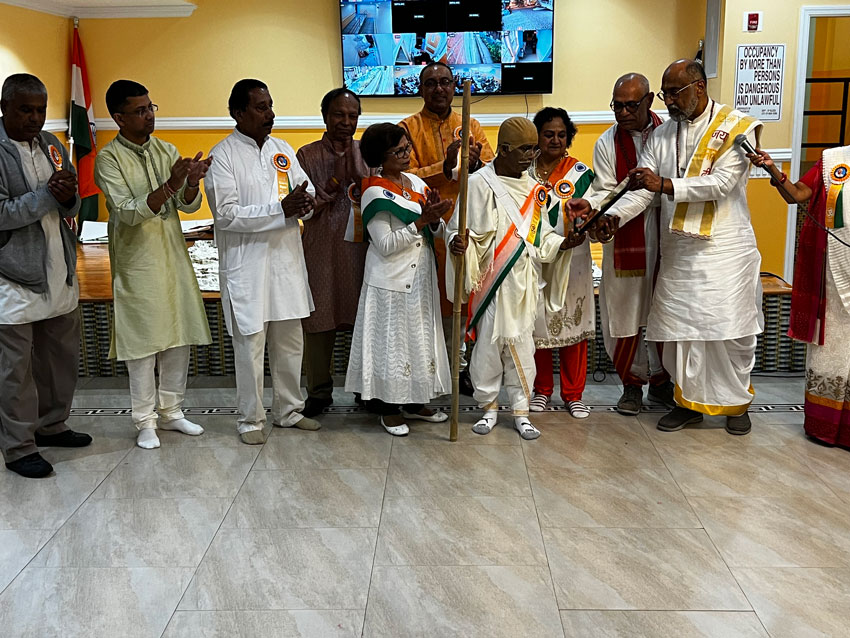 Gandhi inspired many civil rights activists in America including Nobel laureate Martin Luther King Jr. Dr. King led the Civil Rights movement in America, championing equality for all regardless of race, religion, nationality, sex and color. The Civil Rights Act of the early 1960s led to the Immigration Act of 1965 paving the way for the immigration of Indians and other non-Whites into the USA. Gandhi’s independence movement also paved the way for the independence of Caribbean colonies.
The Little Guyana Gandhi Peace March was organized by the Federation of Hindu Mandirs led by President Pandit Ram Hardowar, a Berbician who is also a spiritual leader of Shri Surya Narayan Mandir of 172nd Street. 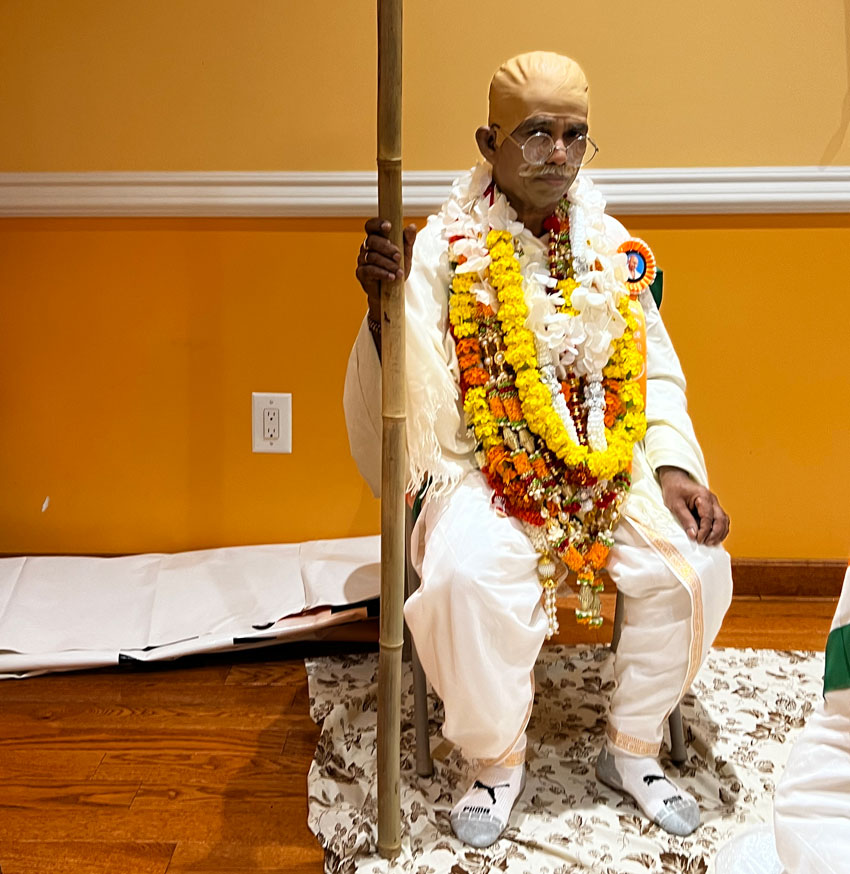 President Hardowar opened the march in the heart of Little Guyana with a prayer and delivered brief remarks on the relevance of Gandhi’s message of non-violence and peace. The march was facilitated by the NY Police
The march, held on Liberty Avenue, began on 122nd Street and ended on 111th Street in Richmond Hill, Queens, culminating at the Guyanese Tusli Mandir, just off Liberty Ave. 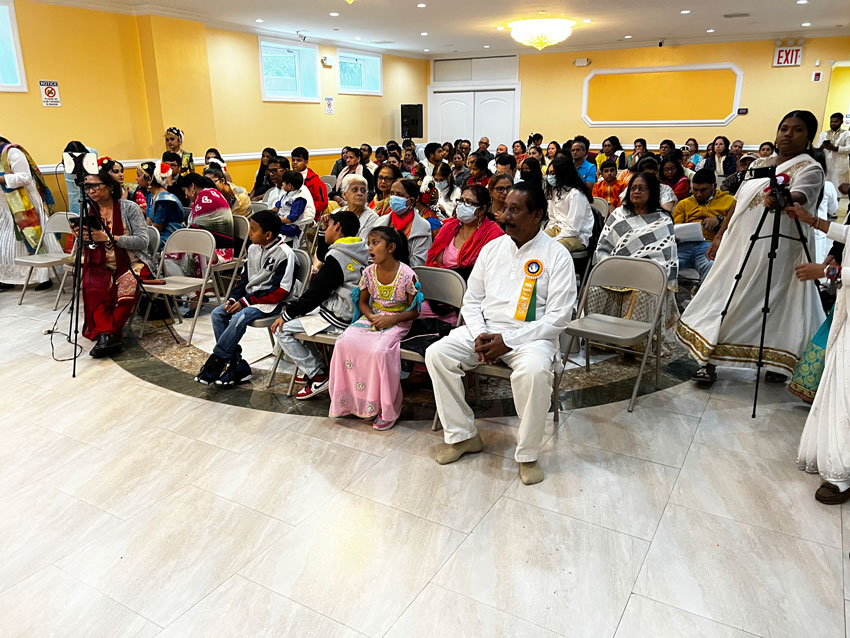 Guyanese, Trinis, and other groups joined in the march that was led by a tassa band and flag bearers carrying the USA, Guyana , Trinidad,  India, and other flags.  Onlookers cheered the marchers who were escorted by the police and which resulted in the closure of streets.
At Tulsi Mandir, there was a cultural variety program in honor of Gandhi-ji.  The programme, emceed by Bahen Vedo, included classical dances and bhajans by members of several mandirs.  Remarks were made by several prominent community leaders including Pt Hardowar, Romeo Hitlall and elected representatives including Jenifer Rajkumar and Joe Addabbo, both of whom represents the area in the state legislature. There were classical d ance performances and singing of bhajans including the favorites of Gandhi.  Pandit Ram saluted the pioneers of the Gandhi Peace March and the executives of the Federation in organizing the march and cultural programme. There were representatives from numerous mandirs and organisations 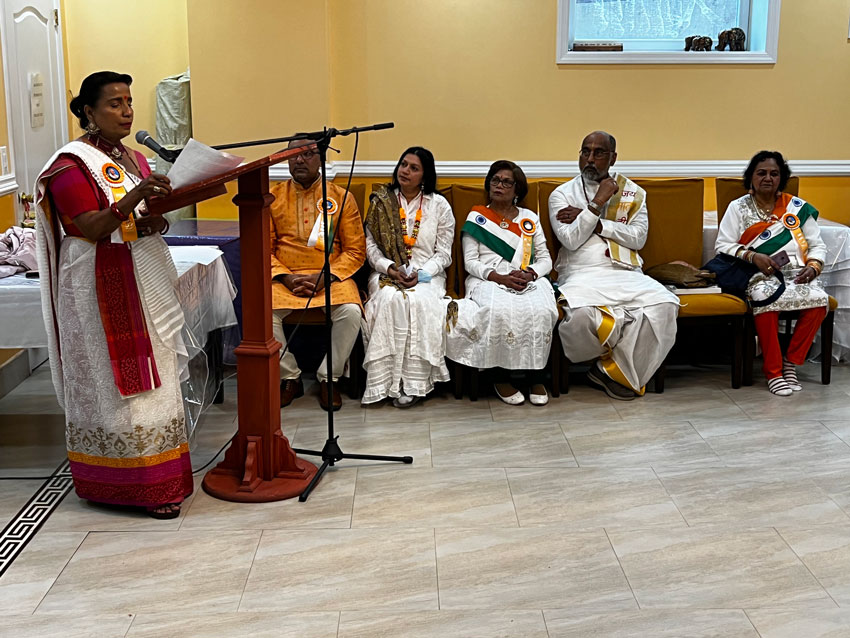 As usual, Pandit Baya led the march acting as Gandhi with his trademark stick. This year, Pandit Narayan Latchana, popularly known as Pandit Baya, was honored for his steadfast commitment to the teachings of Gandhi. Pt. Baya was born in Free Yard, Port Mourant and raised in Black Bush as well as Tain, Port Mourant. He migrated to NY two decades ago and helped built and rehabilitated temples. He was honored with a plack for his service to the cause of Gandhi - ism, ahimsa (nonviolence) and Satyagraha (passive civil resistance).  He stressed the importance of emulating the values and ideas of Gandhi.  He stated that peace and non-violence can bring about real, positive change in any society.
Indo-Caribbean Peace March Indo-Caribbean Richmond Hill Mahatma Gandhi Dr Vishnu Bisram Little Guyana Tulsi Mandir Newyork Romeo Hitlall