This award-winning singer / songwriter Nisha Madaran was born in Suriname on the 11 Jan 1988 despite her young age has many years of experience and notches on her belt. Nisha started showing interest in singing from the tender age of 5/6 and even opting to join her family band “Nice & Easy” professionally for 10 years from the age of 16 to 26 years old.

This talented young lady is equally versed in singing both modern Bollywood and classical Indian styles as well as a multitude of languages (English, French, Spanish, Dutch and Surinamese) which gives her versatility in her range and increases the variations in her music productions and sets her apart from many others. Understanding the practicality and importance of a formal education in conjunction with a passion for your career choice Nisha is currently pursuing a degree in Law at the University of Suriname as well as following her heart and attending the Green Conservatory of Suriname to study music as well.

This beauty has received awards from Suriname, Netherlands and even India for her contribution to the artform and bridging the cultural gaps through music and can boast of performing alongside many well-known Bollywood and international singers since becoming a contracted Bollywood singer in 2015.

Nisha is also actively involved in social projects involving children, disabled persons and the elderly demonstrating that she is an exemplary role model for youths of the indo-caribbean community and deserves to be highlighted for her achievements thus far as we wish her good luck and continued success in all that she is yet to achieve as she gets sets to conquer the music world!

From 2015 to 2019, she was nominated with the most music awards ever in Suriname at the SuMusic Award show and won the most Music Awards in a row, which are Best Female Artist (5x), Best Hindi Artist (4x), Best Collaborations (2x), Best SuMusic Songs of the

Year (2x), the prestige award for “Integration of music and cultures” and the most wanted People’s Choice Award (5x), which is being awarded to the artist with the most sms votes. 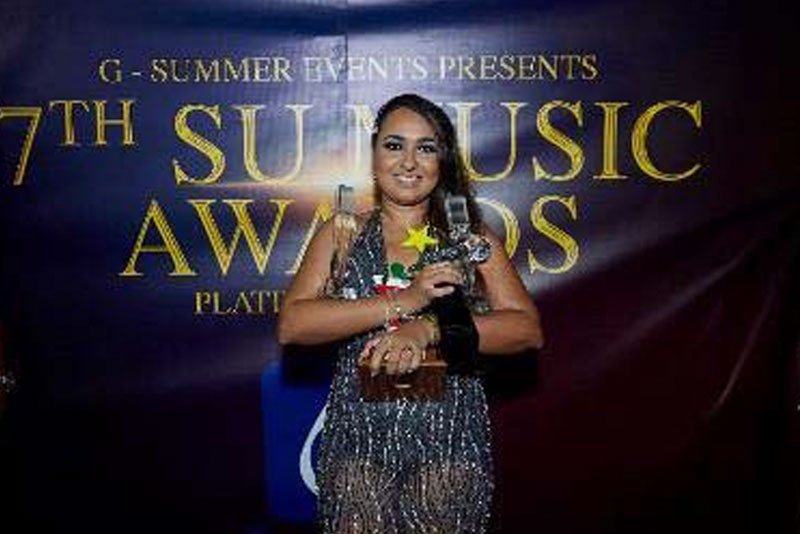 Nisha has been decorated by the Republic of Suriname in November 2016 (“Ridder in de orde van de GeleSter”) for the way she brings integration through her music to all people, cultures and religions and the positive branding of Suriname in and outside Suriname as well as all the social work that she does for children and women in need.

Four Lions Pin” because of her musical compositions that brought integration in music of different cultures, fusion styles and languages.

These decorations gave her the title of “Ambassador for integration of music and cultures”. In August 2018, Nisha was awarded with the “Diaspora Award in the Netherlands”, which is given to people with an extraordinary achievement and example in their field of work, which bring integration within cultures.

In November 2018, Nisha received a letter of appreciation from the Minister of External Affairs of India for the music she brings to the world as a “person of Indian origin”, spreading the Hindi language and culture worldwide. 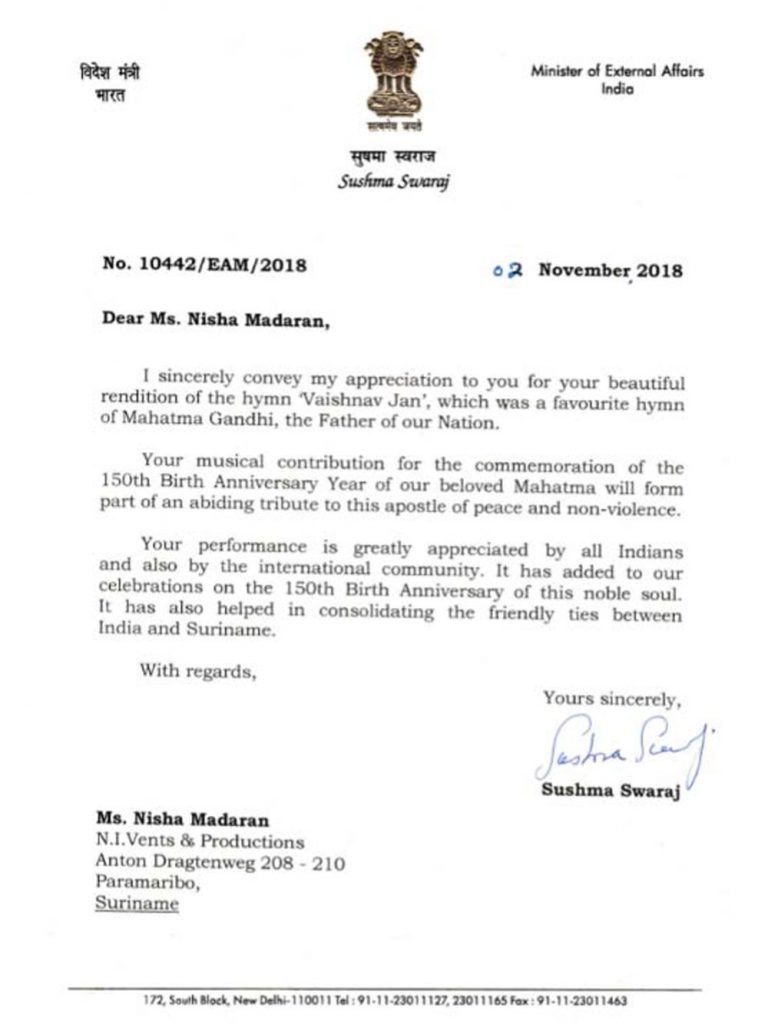 In July 2019, she got a recognition award for all she did for the entertainment industry of Suriname, from the Permanent Secretary of Culture of Suriname and TrackDrip, an online music streaming platform.

In February 2020 she received a Special Achievement Award from the Permanent Secretary of Culture of Suriname as a recognition for the way she brings her music to the world in a unique way that show integration of music and cultures.

At her 24th birthday, she was asked to perform with the Award winning ‘Yaadgaar Orchestra’ in Suriname. From that moment her career went to a bigger stage.

She performed with artists from India, Netherlands, Guyana, Trinidad, Cuba and France. She felt honoured to perform on the stages of artists from India like SANAM, Sonu Nigam, Kunal Ganjawala, Babul Suprio, Vipin Sachdeva, Mukthar Shah, Radjes Pawar, Rakesh Maini and others singers. Since 2015 she gave concerts in The Netherlands, Trinidad, Guyana, Barbados and Suriname. 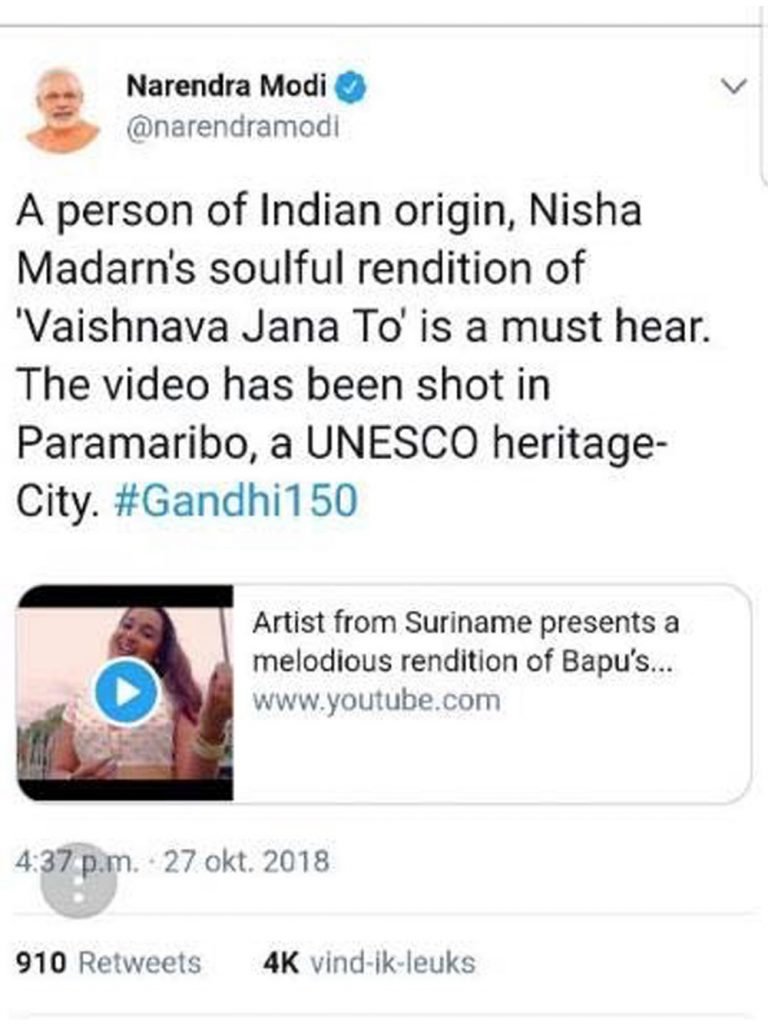 Photo : On special request of the Government of India, Nisha sang “Vaishnav Jan To”, as the most favorite Bhajan
of Mahatma Gandhi on the occasion of his 149th birthday celebration in 2018. The Prime Minister from India
Mr. Modi shared Nisha’s version of this song on Twitter and called it “soulful” and “a must hear”

Together with Yaadgaar Orchestra from Suriname, Nisha participates in a tour of 6 concerts in the Netherlands in September – October 2019, a 100% Surinamese production (musicians and singers)

From her 26th birthday, she participated in national and international festivals, concerts and events like “Fet de la Music (2016), a worldwide French festival celebrating the French Independence.

concert in Ahoy Rotterdam/ Netherlands. She had the honour of performing as a special guest at the ZeeTV Business event in The Netherlands.

Nisha Madaran has attended several workshops and participated in the Famous Music Festival in 2014 in Suriname, is also part to the Indian Cultural Center (ICC) in Suriname and gives pro-bono concerts for social projects.

She performed several times with the great Bryan B. In April 2017, she participated in the 180 years celebration of the oldest Theater in Suriname and she danced, acted and sang along with lots of great artists, including Karin Bloemen from The Netherlands. I

n May and June of 2017 she participated in 4 concerts in The Netherlands of IloveSu (that was held in The Box in Amsterdam) and Festival Weekend (in Silverdome, Zoetermeer),

which was powered by ZeeTV.

In June 2017 she went to ZeeTV London for a Live TV interview at Zee Companion. In August 2017, she had the honour to represent Suriname at the Carifesta XIII festival at Barbados.

Nisha will graduate in Law at the University of Suriname this year.