The 50th anniversary of the expulsion of Indians from Uganda in 1972 by President Idi Amin. INVITATION TO OUR 111th ICC ZOOM PUBLIC MEETING

In the 1890s, about 40,000 Indian labourers, mostly Punjabis, migrated to Uganda to build the

Uganda Railway commissioned by The Imperial British East Africa Company. Later, Gujarati traders joined to serve the economic needs of the contracted workers. Over time, these Asians became prosperous and dominated much of the Ugandan economy which prompted the rise of resentment and Indophobia.

On August 4th 1972, the President of Uganda, Idi Amin, ordered the expulsion of their descendants, giving them 90 days to leave the land-locked East African country. The expulsion of almost 80,000 Ugandan Asians took place against the backdrop of anti-Indian and anti-Pakistani sentiment, with Amin blaming them for corruption, not mixing and being unpatriotic. He also criticised them for being “bloodsuckers”, milking the wealth that, he said, rightfully belonged to Africans. The black majority population was also envious of their success. Amin defended the expulsion by arguing that he was "giving Uganda back to ethnic Ugandans", meaning Afro-Ugandans. 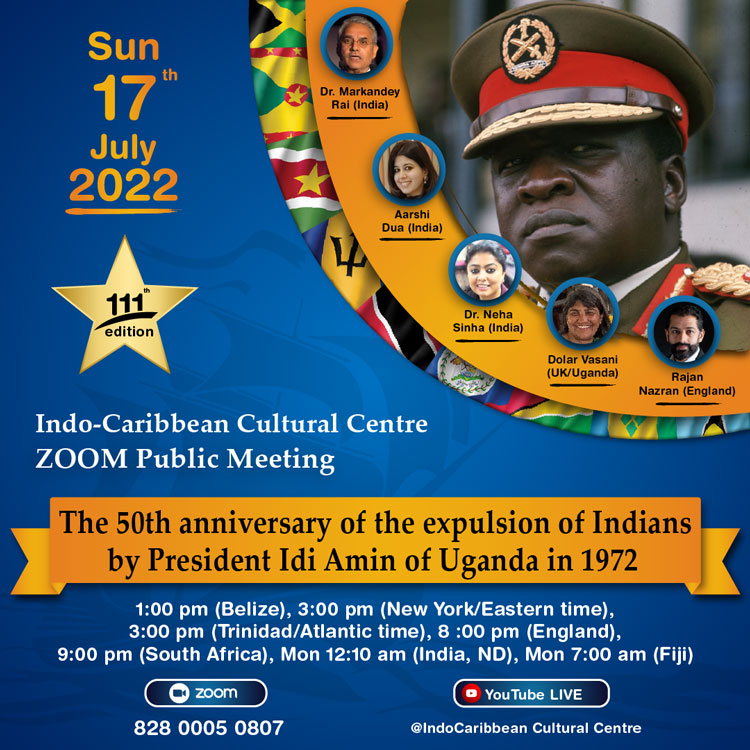 Most of the Ugandan Asians emigrated to the United Kingdom. Some went to Canada, India, Pakistan and nearby Kenya. In total, some 5,655 businesses, ranches, farms and agricultural estates were confiscated. Cars, houses and other household goods were appropriated. After the Asians left, the economy was run into the ground through incompetence, mismanagement and corruption. Once-productive agricultural lands were abandoned, or reduced to subsistence farming.

In 2012 - 40 years later - then British Prime Minister David Cameron said that the migrant Asians and their descendants from Uganda were “one of the most successful groups of immigrants anywhere in the history of the world”. This strand of migration - from India to Africa to Britain - is unique in the history of the Indian diaspora.

DR. MARKANDEY RAI (India) -   President of the Foreign Affairs Committee of the Indian Council for International Cooperation and the Chancellor of the Global Open University

AARSHI DUA (India) - Ph.D. candidate at  Jawaharlal Nehru University. Thesis: “The Return of Asians to Uganda after Expulsion: Their role, contributions and challenges, 1991 to 2017.”

DR NEHA SINHA (India) – Ph.D. from the Centre for African Studies, Jawaharlal Nehru University, and an Assistant Professor-II at the Amity Institute of International Studies.

RAJAN NAZRAN (England) - Chief explorer for the Global Indian Series. Just returned from Uganda for an upcoming documentary looking at 50 years on, and the truth behind the nation.

Demography, race and race-mixing in Guyana: Socio-political implications for the Indian Diaspora

Demography, race and race-mixing in Guyana: Socio-political implications for the Indian Diaspora. INVITATION TO OUR 112th ICC ZOOM PUBLIC MEETING