This month, Trinidad and Tobago celebrates its 60th anniversary of political independence from Great Britain, an event which took place on 31 August 1962. Prior to independence, the country was a British colony. At midnight on the 30 August, the British flag (the Union Jack) was lowered, and the red, white and black Trinidad and Tobago flag was raised for the first time. Bells tolled and sirens rang out to herald the birth of a new, independent nation. There were representatives from over 50 nations present for this historic occasion including the Queen’s representative Her Royal Highness The Princess Royal who read the message sent by Queen Elizabeth II.

Of Chinese origin, Sir Solomon Hochoy was appointed as the country’s first Governor-General. Afro-Trinidadian Dr. Eric Williams was appointed the Prime Minister, with his People’s National Movement (PNM) forming the first independent Government. But what of Indo-Trinidadians, who formed the second-largest ethnic group in the twin-island? What role did their political leaders play in achieving independence for Trinidad and Tobago in 1962? Should Dr. Eric Williams alone be given credit? Who were the unsung heroes of the Indian community who helped place safeguards in the Independent Constitution to provide equal opportunity for Indo-Trinidadians as a political minority? 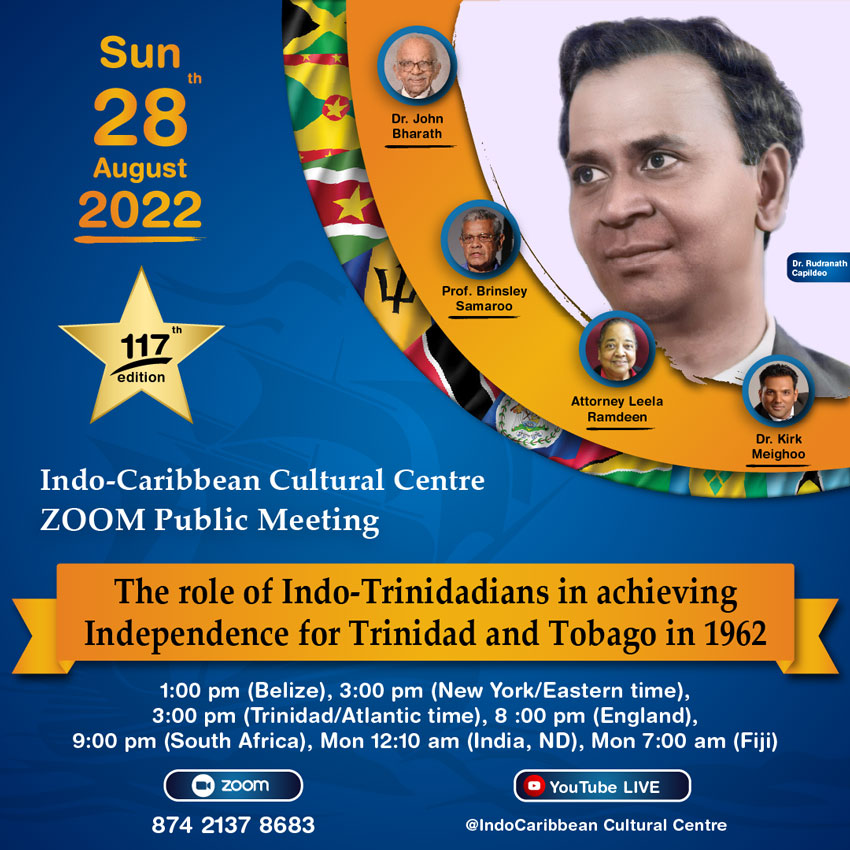 PROF. BRINSLEY SAMAROO - Professor Emeritus of History at the University of the West Indies (UWI). Former senator, minister and MP in the Government of Trinidad and Tobago.

ATTORNEY LEELA RAMDEEN - Daughter of Balgobin Ramdeen, former MP in the first Independent Parliament for the Democratic Labour Party (DLP) for Caroni East from 1961 to 1966.

Indians in Agriculture in the Diaspora: Withdrawal, Migration or Discrimination

Indians in Agriculture in the Diaspora: Withdrawal, Migration or Discrimination INVITATION TO OUR 121st weekly ICC ZOOM PUBLIC MEETING

Education Trends in the Indian Diaspora: The Significance of the Humanities & Social Sciences

Education Trends in the Indian Diaspora: The Significance of the Humanities & Social Sciences INVITATION TO OUR 120th weekly ICC (+AGI) ZOOM PUBLIC MEETING