News
New York City Mayor Eric Adams on Wednesday afternoon August 24 addressed a press conference cum rally of local politicians, community leaders, and the public at the spot in front of Shri Tulsi Mandir where Gandhi’s statue was destroyed on the wee hours of August 16. . The White House also issued words of condemnation of the Gandhi statue in Richmond Hill with spokesperson saying, "The United States is committed to ensuring safety, security, of everyone and condemns attack on Gandhi ”.
The Mayor and other public figures, as well as community leaders, uttered statements of condemnations of the brazen attack on Gandhi statue, a global icon of peace and non-violence and the father of free India. Muslim, Christian, Jewish, Jain, and Sikh leaders, in an incredible show of solidarity, joined in the condemnation. The Mayor vowed to give his full support to the Hindu-American community, saying he would marshal all the resources at his disposal to locate and arrest the perpetrators
Before the Mayor spoke, Rajkumar, who is the elected rep for the area, remarked that since the targeting of the Gandhi statue and the mandir, community leaders have re-doubled efforts to combat anti-Hindu hate in communities.  Rajkumar, the first Hindu member of New York State Assembly, and other politicians as well as leaders of Hindu organizations specifically decried animosity toward Hindus.    She said: “H ate crimes against Hindus have gone up by more than 100% over the last couple years.   We are at a time of crisis as hate crimes are up 125%. Hate Crimes against Asian Americans are up 100%, and that includes anti-Hindu hate”. She noted that members of the Sikh, Muslim, and Hindu community that have been attacked for their faith in her district. “This kind of hate will not happen in my district, not in my backyard, and not on my watch. Gandhi always said that love will overcome hate. With the outpouring of support today from leaders across the city and nation, I know that Gandhi is right.”
Richmond Hill resident Romeo Hitlall, described as ‘the Hanooman of the community’ by Rajkumar and Pandit Lakram, said they have received “extraordinary love” from faith leaders in the Sikh, Jewish and Muslim communities. “Hindus are inclusive, peaceful and loving. The Gandhi statue may be gone but we will carry Gandhi’s message of peace, love and hope to our city, state and our country. We are Hindu and we are proud Americans. Today, our community glows in the spotlight and the sky’s the limit for the Hindu community and our children.”
Pandit Lakhram Maharaj thanked the public for their outpouring of support following the desecration of the mandir. “Our skin color might be different, but the blood that runs through our veins is the same,” Maharaj said. “Our religion may be different but we are worshiping the same God. Hate does not have any role in this community, and in this country. Mahatma Gandhi teaches us that if you want to have change within this universe, you should be the change that you want to see onto everyone.”
The Mayor told the gathering that he wouldn’t tolerate hate aimed at religious establishments, or hurting people based on their “way of life”, highlighting hatred aimed at the Asian American and Pacific Islander, Muslims, and Jewish communities. The mayor urged the city to embrace Gandhi’s beliefs of love, tolerance, peace, and non-violence. 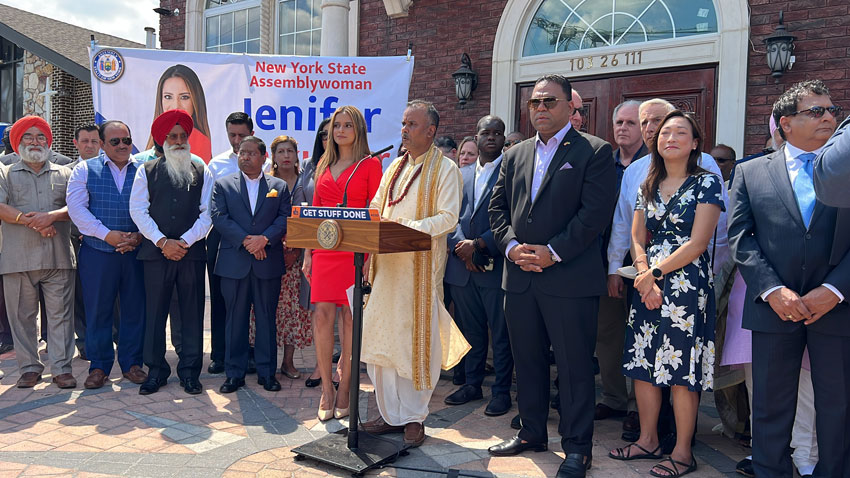 He said: “To my Hindu friends, all new Yorkers are together on this attack. This is the second attack on our leader Gandhi during the month of August. Some 75 years ago, Indi and Pakistan got their independence. This is a significant moment. Anyone who uses this historic event to highlight hate will not succeed. Hate has no place in Richmond Hill, the city, and in our country. We are insuring the persons responsible brought to justice. We will not allow attacks on places of worship. Religious institutions play an important role between government and the public. We must live in unison. One of the most diverse places to live in is New York City. I attended significant events of religious groups. I marched in India Parades including as Grand Marshall last Sunday. We must send a clear belief that the bedrock of our society is unity. We will educate our children about diversity and that the need to live together. There is not one house of worship that sows out hate. They all about love, tolerance, we will not tolerate hate in city. Perpetrators will be brought to justice”.
He added: “Hate has no place in Richmond Hill. Hate has no place in New York City. Hate has no place in our country. We are not going to stand back and allow attacks on our houses of worship. They play a crucial role in closing the gap between government and the needs of people. We will not allow an individual to participate in this hate going un-apprehended”.
The mayor said the city will also follow another road that goes far beyond the law enforcement arm. The goal is not only responding to hate but preventing hate. We’re going to zero in on classes in schools. We are going to encourage you to participate in our ‘Breaking Bread, Building Bonds’ one thousand dinners across the city with people coming from a different background, talking to each other, sharing who we are, why we do what we do”.
The Mayor said he visited India years ago and visited the last steps where Gandhi walked before he was fatally shot. He said: “The bullet that took his life – it is continuing the emotional path of attempting to rip apart our communities. Today, we stand together as Jews, Christians, members of Sikh communities, Hindus, and all the other communities that are a part of us to say that bullet is not going to continue to rip us apart”.
Joe Yussuf, representative of the Guyana Consulate in New York, uttered a message from Guyana President Irfaan Ali condemning the attack and offering the government of Guyana solidarity with the temple, its executive, and the community.
Local elected officials such as City Council Member Joann Ariola, Senator James Sanders Jr., Assemblyman David Weprin, Queens District Attorney Melinda Katz, Congressman Gregory Meeks, Council Speaker Adrienne Adams, the rep for the area, State Senator Joseph P. Addabbo Jr., State Senator Leroy Comrie, Councilwoman Lynn Schulman, Assemblyman Khaleel Anderson, Queens Boro President Donovan Richards, and Councilwoman Joann Ariola,  also delivered or sent remarks at the press conference denouncing hate crimes and this attack.

The Consulate General of India to NYC, Shri Randhir Jaiswal, was also present for the program condemning the attack that came on the night after India’s 75thindependence anniversary. There were dozens of Guyanese and Trini Hindu leaders from the community including Pandit Latchana (Baya) Narine of Black Bush. Indian nationals Ragbir Singh, Harpreet Tour, and Dr. Nita Jain, Mohammed Ali of Bangladesh community, Mohamed Khan a community patrol cop, Jewish Rabbi and scholar Abni Poznik, Hindu American Foundation Executive Director Suhag Shukla; Sherry Ogreada of Trinidad, and Queens Community Board 10 Chair Betty Braton were also among the many others who appeared in person to give remarks condemning the attack on Gandhi