When I read that the recent protest on the East Coast of Demerara in Guyana which resulted in the beating and robbing of Indo-Guyanese and burning of their properties was started by a misleading news report from a media house, I immediately recalled an article some years ago in the UK Guardian newspaper under the caption “Journalists jailed for inciting Rwandan Genocide”.

I note that the editor of the news outlet was suspended for his misleading report. However, will this individual or his news outlet face any legal consequence? I seem to recall that irresponsible news reporting helped to foster the post jail-break mayhem on the East Coast during Mr Jagdeo ’s term as President and there was no consequence. The PPP is in government once again and once more we see beating, robbing and burning of properties of innocent Indo-Guyanese.

It is good to see that President Ali has promised to compensate all those who suffered loss during this most recent outbreak of violence. However, financial compensation will not heal the psychological harm that has been done, not only to those who were beaten and/or robbed but to the entire Indo-Guyanese community who cower in fear every time they hear of a protest by Afro-Guyanese.

The Guyana Police Force has once again proved ineffective in protecting innocent Indo-Guyanese. Some months ago, the Acting Commissioner of Police promised to reform the Police Force to make it more reflective of the make-up of the population. To date, neither President Ali nor any of his ministers has offered any public support of this initiative while Indo-Guyanese continue to be unsafe and vulnerable. They are crying out for protection.

With a one-seat majority currently and roughly three more years before the next general elections, President Ali and his government should not take the Indo-Guyanese vote for granted. Should someone like Dr Yog Mahadeo of the Article 13 Group decide to lead a new third party in the next election, the PPP could easily find itself in the opposition benches. Dr Yog Mahadeo is the son of a late PPP stalwart and his brother is a leading member of the PPP. His entry into politics with individuals like Mr Christopher Ram and newspaperman Mr Glen Lall could upset the PPP applecart. 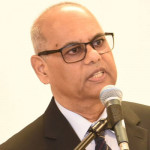